“Your tool of knowledge is Speech, because its boundaries establish the possibilities of the world.” – Baba Rampuri

Baba Rampuri, author of “Autobiography of a Sadhu, a Journey into Mystic India,” and frequent commentator on Oral Tradition, Sacred Speech, and post colonial analysis, is an American expatriate,  the first foreigner to be initiated into India’s largest and most ancient order of yogis, the Naga Sannyasis of Juna Akhara.  He has lived in India since 1970, where he practices and teaches the oral tradition of the Sanatan Dharma, conducts sacred ceremony and rites, and hosts workshops and retreats.

He is now a guru with a number of disciples within the order.  At the Maha Kumbh Mela in Haridwar, 2010, he was honored with the title, “Shri Mahant,” for his 40 years of practice and service, and given a permanent seat in the Council of Juna Akhara.

During his long discipleship in the mystical and sometimes dangerous world of the wisdom tradition, he received oral teachings in sacred speech, mantra, tantra, ayurveda, logic, ritual, and, encompassing all the above, the way of the yogi in the Yoga Tradition.

Baba Rampuri was born in Chicago, the son of world renowned pediatric surgeon, Dr. Stephen L. Gans, who helped establish the field of pediatric surgery and was one of its greatest innovators.

Growing up in Beverly Hills, California, in the 50’s and 60’s, among the wealthy and famous, he became critical of the “culture of spectacle,” and began exploring other cultures, as well as counter-culture alternatives.  Influenced by teachers such as Alan Watts, and his reading of Indian philosophy, Baba migrated to India in 1969, and soon afterwards became a sadhu and disciple of the great yogi, Shri Hari Puri Maharaj.  After satsang tours in the United States in 1971 and 1973, and a year doing research with Prof. Frits Staal, at the University of California at Berkeley in 1974, Baba began teaching sacred speech in New Delhi in 1977.

Baba founded Hari Puri Ashram in the Himalayan foothill town of Haridwar in 1984. Baba has since become a member of the Council of Elders of Datt Akhara, Ujjain, Central India, and the special envoy of its Pir.  He divides his time between his ashram in Hardwar, Datta Akhara in Ujjain, and in Goa. He hosts an international camp at Kumbh Melas (the most recent being the Maha Kumbh Mela in Allahabad, 2013), as well as retreats, teachings, and initiations in India.   He gives lectures and teachings throughout the world on consciousness and inner exploration, and conducts a bi monthly MasterClass in consciousness and speech on the internet.  An archive of these teachings is available in his “Consciousness and Speech Series.”

In his acclaimed 2008 lecture series, known as “The Edge of Indian Spirituality,” in Basel, Switzerland, as the guest of Dr. Albert Hofmann, Baba Rampuri countered the rapidly growing trend of “dumbing down” the treasure of Indian culture and its replacement by new age commercial clones. 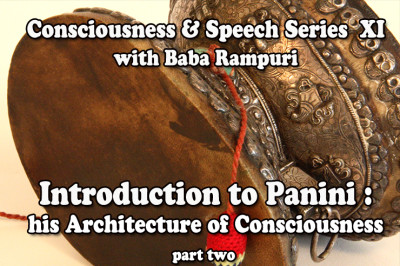 Biography of Panini, Master of Speech (2)

Biography of Panini, Master of Speech Consciousness and Speech Series XI. Sacred Speech Masterclass XI, part two. Baba Rampuri, in his introduction to Panini, discusses the biographical aspects at the foundation of the enormous impact the […]

Panini – Birth of Linguistics (4) Consciousness and Speech Series XI. Sacred Speech Masterclass XI, part one. Baba Rampuri attributes to Panini the birth of linguistics, 2500 years after his time. In his introduction to Panini, […] 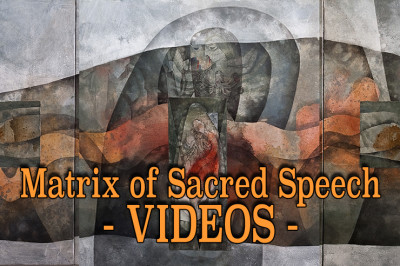 The Edge of Indian Spirituality Videos 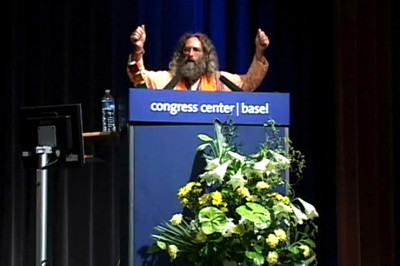 The Edge of Indian Spirituality Videos

The Disappearance of the Yogi – XII

The noble, rigorous, and restrictive figure of the Yogi is to be forgotten.
The signs that mark him are to be thought of as the fantasies and charms of a knowledge that had not yet attained marketability.

Baba Rampuri talks about the role and nature of Hindu scriptures and sacred text in Indian tradition.

The Yogi, having an uncluttered mind resembling that of a still mirror like lake, is connected (yoga) with the Mother Goddess, and acts like a conduit through which HER blessings flow.

Adi Sankara and the Frog – IX

Baba Rampuri tells the story of how Adi Sankara established his main monastery, Sringeri Math, and the Temple of Sarada Devi, where he witnessed a pregnant frog trying to cross the deadly hot sands in the noon day sun, trying to reach the river.

Secret Shakti of Matrikas Syllables of Sacred Speech Basel, Switzerland, 2008 Baba Rampuri talks about the nature of sacred speech: syllables, aksharas, and matrikas living in the sacred geography of our articulation. “For, as the stars […] 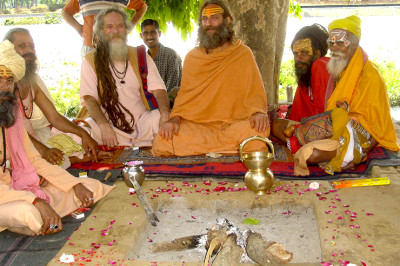