With long wool ropes wrapped around their waists and clanging their ankle bells as they shuffled their feet, they held out their bowls made from human skulls as they begged for flour.

This name of Shiva is He with No Eyes. Shiva is blind, his eyes unfocused and turned up in meditation on the Supreme Void. Look up, I heard inside my head. Abandon what lies below. The world is an illusion. Drop your attachment to the senses that perceive it. Climb to the peak of blind Shiva’s mountain!

Hari Puri’s eyes also went up inside his head, as he raised a chillam to the sky and taunted Shiva as he yelled:

Hey You with no eyes! Open your eyes!

And see the glitter of the world!

It was customary to fast for the big initiation. This did not mean a total abstinence from food but avoiding cultivated food such as grains and vegetables. Hari Puri fed me a breakfast of yogurt and bananas before putting a piece of paper, a parcha, in my hand and sending me to the temple of Dattatreya to await further instructions.

At the Marhi, an itinerant red-eyed drummer whacked his dholak into a frenzy, as countless chillams circulated among the neophytes. There were old babas with white beards and wrinkled faces and pre-teens with not so much as peach fuzz. There was a cross-section of north Indian rural society and perhaps a few from the cities, but everyone was about to be equalized. Clad only in white loincloths we sat on the cold clay on that January morning, getting pumped up, waiting. Red caped kotwalis, sergeants-of-arms, marched back and forth, their long silver staffs over their shoulders while other Nagas would come by to inspect the new crop of sannyasis. 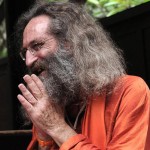 Baba Rampuri, author of "Autobiography of a Sadhu," commentator on Oral Tradition, Sacred Speech, & Consciousness, is an American expatriate,  the first foreigner initiated into India's most ancient order of yogis, the Naga Sannyasis of Juna Akhara.  He lives in India since 1970, where he practices & teaches the oral tradition of the Sanatan Dharma, conducts sacred ceremonies and rites, & hosts workshops & retreats.

END_OF_DOCUMENT_TOKEN_TO_BE_REPLACED

Daf at the Dhuni

Be aware, but have no fear!

Mass Media, Propaganda, and Sacred speech. Baba Rampuri is interviewed by Thomas Steininger, the editor of “Evolve,” a leading magazine of consciousness and culture in Germany, https://www.evolve-magazin.de/, on sacred speech in the postmodern world of mass […]

Navdurga – the nine forms of Durga

Navdurga, are the nine forms of Durga collectively worshipped by Shakti devotees. Scriptures differ in naming the nine incarnations. Pictures and paintings of the Nava-Durga also varies from region to region. The most widely accepted account […]

Mahishasura Mardini Long ago in a time not so different from now, the mighty Asura king Mahishasura was granted the boon of immortality by Shiva, through extreme tapasya and prolonged meditation. Shiv Ji was so pleased […]

Baba Rampuri’s “Must Read Books List” In response to numerous requests for a reading list, I have listed those books and authors I consider valuable, in various ways, for the Conscious Spiritual Mind, and as a […]

Afterwards, give WITH BOTH HANDS the red flower that was placed on the yantra to a special female, wife, mother, daughter, best friend, girlfriend, etc., whether or not she was present during the invocation. At the moment you give it to her, imagine her to be the Mother Goddess Herself.

mahesh25 - December 29, 2016:
nice post! Thanks for providing the complete information of navarathri festival, During [...]

The Blog – All the Posts