The Blessings and Gratitude Moon

“I send you love, light and the blessings of health, happiness, and prosperity on the occasion of Guru Purnima 2016, from India.”  –  Baba Rampuri For those of us in Wisdom Traditions in India, especially the Oral Tradition, this is our most important full moon of the year.

Today, during this full moon, we in the traditions of India, express our gratitude for, honor, and worship the Guru. In my guru puja today I name not only my formal gurus in my tradition and lineage, and our Devata Gurus such as Shri Adi Shankaracharya Maharaj and Guru Dattatreya, but all my many gurus, teachers, and mentors, for all time.

In our own life-story as in any Storytelling, the archetype of the Guru, who Joseph Campbell calls the “mentor” is the crucial element in the story paradigm that guides our hero into and across the Extraordinary World where challenges appear, and ultimately supports our hero in a confrontation with his/her nemesis. The covenant between Consciousness, personified as Shiva, and man (as he may perceive the world), provides a Way Home, a Path of Knowledge, in the form of discipleship and continuous lineage.  We call this the “Guru-Shishya Parampara,” the Oral Tradition.

The Full Moon on the 19th of July, ending the Indian month of Ashadh, begins a traditional four-month period when sadhus, yogis, and gurus stay out of the rains, usually in one place, and keep travel down to a minimum.  It’s the first day of the “Guru’s Retreat.” This is a day when all the disciples and devotees gather around their gurus, for the blessings are most powerful on this day, celebrate the full connection of Sun and Moon and Guru and Disciple.  They honor the guru and make puja to him or her.  Disciples and devotees bring gifts of new cloth, flowers, sweets, and dakshina.

And for those disciples and devotees that cannot be physically with the guru, one can connect with the guru through the full moon.  We bounce messages and blessings off the moon, and the connection on Tuesday, July 19th is at its greatest clarity and power.

We think of this Full Moon as the Blessings and Gratitude Moon.  So this is the most opportune moment for us to honor ALL our teachers, whether alive or otherwise, whether human or otherwise, and show our gratitude for their blessings which grace our lives.

In our post-modern times, the Ocean of Story is so horribly polluted by the political and commercial narratives – our Speech has been colonized by the euphemisms of mass media. Let us use the word “guru” as a metaphor to signify those who will connect us with our organic selves, giving knowledge and understanding not invented for the marketplace, but passed from human generation to human generation, whether in India, Europe, or anywhere else. He/She who will dispose of the illusion of separateness, challenge the myth of the individual and pull us from our isolation into the human collective within which we may be prosperous.

Monsoon rains are pouring down now in India.  I haven’t checked reports, but it seems to be a good one, lots of rain, at least where I’ve been.  Traditionally, we sadhus and yogis travel from place to place during much of the year.  We go on pilgrimage, visit our elders and gurus, we are invited to feasts and functions, we attend gatherings.  But monsoon has never been the best time to do this, especially in the “old days” when our travel was by foot.

In our tradition, in which metaphor and body are indistinguishable, the guru is the matrix of all things, mother and father at the same time, the source code.

That’s why we sing: Guru is Brahma, Guru is Vishnu,
Guru is Maheshwara (Shiva),
Guru is Supreme Brahman Itself
Prostration unto that Guru

The Word “Guru” in an Indian Wisdom Tradition In these times, when words can mean anything you want them to mean, the word, “guru,” is used in countless different ways.  So, I’m not interested in arguing for a “true” meaning for the word, but wish to comment on its meaning within my Wisdom Tradition, that of Indian Naga Babas. Guru Purnima is a day in which we honor all teachers.
May you be healthy, happy, prosperous, and wise! 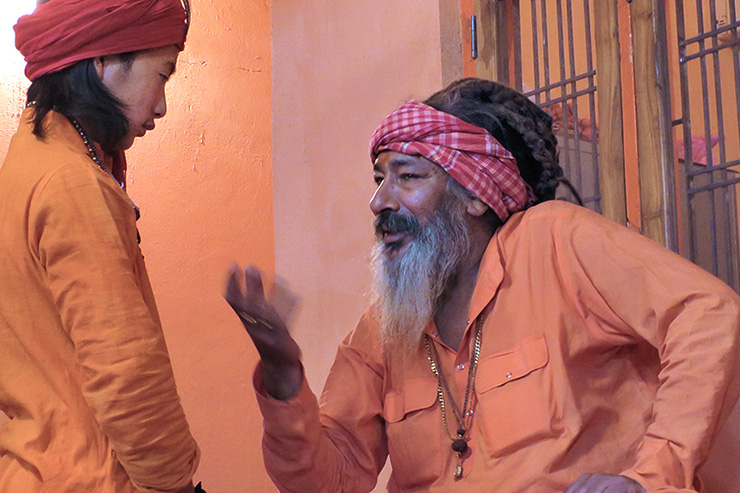